I am currently reading a book called 'Man's search for meaning' by Victor Frankl, a Jewish psychotherapist who survived the holocaust. Though only 150 pages long, it's been a tough book to read for me, but also one filled with immense wisdom. Obviously the topic has made me think a lot of what should be the meaning of my own life. And just at this point, I have come across vastly contrasting approaches to how two highly successful people have tried to add meaning to their lives by helping others...

Before his fall from grace, Rajat Gupta was one of the world's most successful people in the corporate world. Global head of McKinsey for almost a decade, he also sat on the boards of the likes of Goldman and P&G, and co-founded the Indian School of Business. He also advised non-profit heavyweights like the Gates Foundation among others. Then of course came the fall - being convicted for insider trading and spending two years in jail. Last weekend I had the misfortune of getting snagged into what I will call this man's 'image repair yatra (tour)', when he was invited as one of the speakers at an IIT Bombay alum reunion. Now, everyone makes mistakes and I certainly don't want to appear holier than thou, but I found his approach very grating. He claims zero culpability for whatever happened, and paints himself as a scapegoat. To my mind two key facts seem to show how hollow that rings: 1. His fellow partner in crime Anil Kumar pleaded guilty! and 2. Rajat never testified in court, claiming the fifth amendment right to avoid self-incrimination. I think if you aren't willing to testify in open court, then surely you are guilty. Having chosen against that path when the case was live, now he is duplicitous enough to claims in harmless social forums that he kept quiet at the time because of his lawyers' advice! I think real courage would have been to admit that he made mistakes, and then try to rebuild his life from there. But I digress - Rajat Gupta's white collar crimes or his response to the conviction is only tangential to my main topic.

The talk during the event veered to Rajat's philanthropic efforts, and the advice he had to the assembled alum. Obviously I had been fairly put off by Rajat's attempts to whitewash his reputation, so now to have to hear him preaching on philanthropy was a bit much to digest, but I was also put off because I recently read a powerful book by Anand Giridharidas called Winners Take All (must read btw!). In that book Anand ripped apart what he called a charade by the elites to change the world while only serving themselves, whether consciously or, if you want to be more charitable (if I may use the word), sub-consciously. Rajat's philanthropy efforts all fit into the classic flawed playbook that Anand described: pure advisory activities vs feet on street, shotgun application of the consulting toolkit vs a true emphasis on changing the status quo, a premature focus on 'building institutions' and 'scaling' without having first created a sustainable model, so on. Now, I do think that lots of times change can be catalyzed by throwing smart people (and lots of money) at societal problems, but often times the connection to ground realities is lost. But one point Rajat made in particular rang loud and clear in my mind: "education is the great leveler". Rajat brought it up in the context of why he co-founded the Indian School of Business (ISB). While I loved the concept of education as a leveler, and appreciate it the more I think of it, I just couldn't reconcile how Rajat believes that he is changing any underprivileged lives or 'leveling the playing field' by founding an elite business school that accepts candidates who are already at the top of the education / early career pile, and regurgitates them into corporate warriors who usually continue to have no impact on society or the underprivileged (fear not, I am myself a product of this system, so there is a good bit of self-contempt in there).

Dr Abraham George's philanthropy style can't be more of a contrast to Rajat Gupta's. In the outskirts of Bangalore, Dr George personally runs a school for the poorest of the poor called Shanti Bhavan. He is the headmaster and has been running the school hands-on for the last ~20 years, ever since moving back from New Jersey as a successful entrepreneur wanting to give back to society. His experience and struggles are beautifully captured in the 4-part Netflix documentary series called 'Daughters of Destiny' (do watch). Shanti Bhavan believes in starting at the primary education level, before under-privilege can start multiplying it's impact on children. They pick up kids from the lowest strata of society, e.g. 'untouchable' castes, in other words, educating children who were otherwise destined to remain poor and underprivileged. Giving them a true shot at lifting out of their generations-long inequality. The medium of teaching is 100% English - because that's how you get the right jobs. It's a residential school (kids stay on campus for the school year) - to ensure a fully immersive experience without distractions from the curse of poverty. The documentary highlights how much of a struggle it was just to launch and succeed at that one school, when Dr George is ever present and personally managing it. Do you think it would have been possible to launch a 100 such schools and truly maintained any quality / had real impact on the ground, if you had gone 'blitzing this space' as the modern philanthropist playbook suggests? 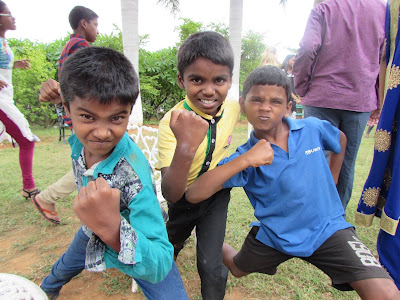 I think the Shanti Bhavan model requires real steel. It's not glamorous at all - no wining and dining wealthy New Yorkers trying to raise the next $100 million to pour into chasing the forever-elusive 'market sustainable' models, and no bandying about impossibly large impact numbers ("we changed the lives of 300 million people with our new model for XX"). Shanti Bhavan touches a 'mere' 24 lives per school year, but truly changes their lives and their life trajectories. And it has taken Dr Abraham George two decades of 100% involvement to get this far. But what a way to add meaning to his own life and that of so many others! Hats off.

PS: One could argue that me being an armchair critic of Rajat Gupta's philanthropy style is hypocritical - what have I done that I get to take potshots at someone who at least has done something? Maybe fair.
at 1:08 AM No comments: