I have been meaning to write about 'class-ism' in Indian urban planning for a while now. In a nutshell, this is how it works: We deliberately invest a lot more into private transport - which supposedly* favors the elite - and willfully under-invest in public transport.

I first noticed this when all these flyovers started popping up in our cities about 10-15 years back. It was a step in the right direction, sure. I mean, our cities are tearing apart so bad that any transport infrastructure is well received. However, the tragedy was that for a full decade or so after we entered the flyover boom, everyone only focused on the flyovers. No one really cared about public transport systems like metro rails or BRTS. Thankfully that's changing a bit now, with metros coming up in about a dozen cities, and several tier 2 cities experimenting with the BRTS. And yet the tragedies remain - of an elitist mindset which mindlessly favors private car users. Some examples below.

1. JJ Flyover in Mumbai is off-limits for motorbikes. The JJ Flyover is a 3 km long elevated road which avoids congested parts of South Bombay and saves 15 minutes of travelling time at least. Bikes were banned on it a couple of years back, ostensibly to prevent biker deaths arising from speeding. Really? Can't we just have better speedbreakers on the sharp turns? The real reason seems to be that (we) car guys want to cruise down that nice stretch of road without having to deal with buzzy bikers. 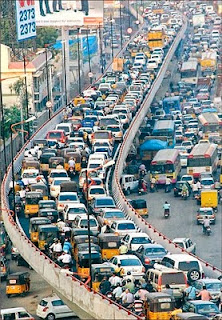 2. Mumbai's new Eastern Freeway is off-limits for truckers. This new 11 km long entirely elevated road provides an alternate exit point from the city's commercial center in the south, to the mainland in the north. Thing is, one of India's largest ports, Mumbai Port, is also in the Southern part of the island city. As of now, truckers exiting the port have to crawl right across the city to reach their destinations. The freeway would have been ideal for truckers to get a quick exit because of its proximity to the port. Heck, most of the freeway was actually built on port trust land. See map below. The dark yellow line going all the way north is the new freeway. Bang next to the entry point is the port (red area in the South). And yet the freeway was only designed for cars. 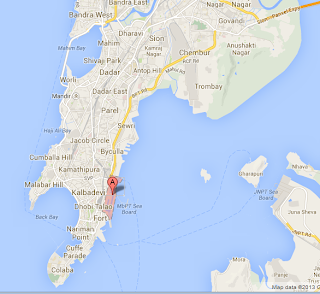 3. Most Kolkata roads are now off-limits for cyclists.
While most cities in the world are encouraging cycling, the Bengal government is doing its best to keep "them annoying cyclists" off the roads! Couple of links here and here.

These are just a few examples of our faulty mindset. The hoopla over the Bandra-Worli Sealink in Mumbai also comes to mind. Did you know that traffic on this bridge has actually fallen in the last 4 years? This Mumbai Boss article also talks about the Sea Link and some of the megalomania / elitism that ails our urban planning. When will we realize that encouraging private car usage on constrained roads will only lead to disaster for our cities? I have some thoughts on what is wrong with Mumbai's local train network, and how it could be improved a lot with a little effort. Will try to write on that shortly.
at 12:20 PM No comments:

Email ThisBlogThis!Share to TwitterShare to FacebookShare to Pinterest
Labels: On governance

Of Droughts And Men

Revisited Steinbeck's Grapes of Wrath after a while. Epic as ever. However my thinking has changed in the intervening years, and in some aspects I don't quite agree with Steinbeck anymore.

The machines are shown to be heartless while the farmers are connected with the land. He who tills the land with his blood and sweat is the rightful owner of the land - not some large corporation. Steinbeck pretty much proposes that we stop the march of modernization. Go against the natural scheme of things in a way.

However, the Dust Bowl of the 1920s was a human tragedy caused by overpopulation.The implications on human life were tragic, but fact remains that we ended up over populating an area which couldn't sustain the human density. Natural balance had to occur. Maybe I appear radical because most droughts or famines could then be explained away as 'natural corrections'. What about the eyes of helplessness, the starving children, etc? As an answer, I think we just need to expand our lens a bit.

We as a species have taken over forests and converted them into farmlands. Sent several species into extinction in the process. There could have been a similar impassioned appeal by nature against man. But the fact is, it was in the natural course of things. About 20,000 years ago, we became at last the one species in the history of the earth which could control master our environment. And in the race of life (survival of the fittest), we did what we had to do - took as much control of our environment as possible. In the process, if we over-stretch ourselves at some places, we just need to realize the implications.

Grasslands are by definition areas where denser vegetation is unable to survive (due to difficult climate). Instead, they sustain a delicate ecosystem comprising grasses, birds, small rodents, etc. However we humans have time and again converted grasslands into farms. The result? These farms may run fine for 10 or 20 years, and then boom, one day nature catches up via a large drought. Steinbeck himself talks about this sequence of events (rampant agricultural-ization of Oklahoma wildlands) as the precursor to the dustbowl events of the 1920s. So when the drought did hit, population was bound to rebalance. Then why blame the machines? I believe that the same issue holds true for semi-arid areas of the Indian subcontinent. Parts of Vidarbha, Telangana, perhaps Orissa...they probably can't sustain the level of farming we have today (where every square inch of non-hilly terrain is under farms). Absolute recipe for disaster. Agricultural advances in the 60s (Green Revolution) mean that at least the farmers in these regions wont die for lack of food, but it becomes difficult for them to sustain anything but the most basic, haphazard lives. Perhaps that is the reason why tragic farmer suicides are so common here. But while this human tragedy has been unfolding over the last few decades, an equally tragic consequence has been the extermination of grassland species. The Great Indian Bustard is of course the poster-boy of grassland species. Nearly extinct. So too are dozens of other, smaller species. How is one to say which is the greater tragedy?
at 2:23 PM No comments:

Email ThisBlogThis!Share to TwitterShare to FacebookShare to Pinterest
Labels: The Environment

Opened the HT this morning and saw an ad for some new 'Palladium Hotel' in Mumbai. A closer look revealed that this is the erstwhile Shangri La hotel! Gosh that was quick! The place opened 9 months ago and is already in trouble. A quick google search confirms it - the asset owner (Phoenix mills) and the operator have 'mutually agreed to part ways'.
http://www.dnaindia.com/money/1880481/report-shangri-la-phoenix-scrap-management-deal

I was always suspicious of the uber-luxury hotel's location, and will stick my neck out and say location would have played a big role in the hotel's failure. Nothing against Lower Parel - I mean, 4 Seasons is doing fine there - but the exact location of this high-end hotel was pathetic if you ask me. Bang next to a crowded mall (the most crowded in Mumbai I would think), with insane traffic in the few hundred meters leading up to the hotel. Which hotel guest would like to see the hotel in front of their eyes and still spend 30 mins in the car waiting for traffic to open up? Actually the entire Lower Parel area has terrible traffic problems, and the 4 Seasons is probably safe because its location is more Worli than Lower Parel.

The news article says the asset owner was in talks with another operator, but looks like they have had to go solo on this one. I think its a terrible turn of events for them. Without the backing of a global hotel chain, it will be oh-so-difficult to get guests to even know about the existence of this 'Palladium hotel', forget choosing it. And Phoenix is kind of stuck with the high-end positioning at least for a few years because of the amounts they have invested on the rooms. Lets see how they wriggle out of this one. The ad did give me an idea - they are strongly focusing on the restaurants and wedding banquet facilities than on the rooms. Well best of luck to them!
at 10:14 AM No comments:

Email ThisBlogThis!Share to TwitterShare to FacebookShare to Pinterest
Labels: On businesses

Ridiculous stuff. Kill the golden goose already. This government is so concerned about its deficit that Vodafone alone couldn't satiate its hunger, now its also harassing loss-making auto MNCs!

Instead, why don't they stop blowing up money on that ever-consuming sink called Air India? Rs. 30,000 Crores we blew up on it last year. And of course all the myriad subsidies. God save this country from the populist Congress party.

Its like borrowing money off a credit card to go donate to charity - forever.

PS: Just saw this article on the 'greedy' taxmen
How can we get investor confidence back if taxmen treat businesses as per se shady?
at 10:01 PM No comments:

All because we don't connect with fish...

The Bluefin Tuna. As numerous once as the American bison. As majestic as the bison. Today it faces the same fate as the bison - complete annihilation. Time article here. Below is a para from an old but eye-opening NatGeo feature on Bluefin:
Do we countenance such loss because fish live in a world we cannot see? Would it be different if, as one conservationist fantasized, the fish wailed as we lifted them out of the water in nets? If the giant bluefin lived on land, its size, speed, and epic migrations would ensure its legendary status, with tourists flocking to photograph it in national parks. But because it lives in the sea, its majesty—comparable to that of a lion—lies largely beyond comprehension.

And another excellent portion...
...all agree that the fundamental reform that must precede all others is not a change in regulations but a change in people's minds. The world must begin viewing the creatures that inhabit the sea much as it looks at wildlife on land. Only when fish are seen as wild things deserving of protection, only when the Mediterranean bluefin is thought to be as magnificent as the Alaska grizzly or the African leopard, will depletion of the world's oceans come to an end.

But you know, the rot is deeper. Man will not rest till he exploits and ruins every single natural resource at his disposal. The Anthropocene (Age of Man) is truly here, and we have already permanently disfigured a great planet in an unprecedented fashion. Decimated its biodiversity. Read more about our age here:

Enter the Anthropocene—Age of Man
at 11:55 PM No comments: