What Mexico's Roma taught me about India

I just watched Roma the other day and found it incredibly incredible. Yes, that incredible that it needed one too many incredibles to describe. Unlike other hyped up movies that disappointed me (cough Black Panther cough), this one delivered and how. What I found most notable was the breathtaking cinematography and sound. I have not watched such a beautifully shot movie ever, or one with more evocative sound. Evocative to me though it's set in Mexico of the 70s - because the sounds and sights of Mexico of the time do have parallels to India of the past. But it takes true genius to bring all that to life. Now, I am not a cinephile or anything close, so I am pretty sure there are other beautifully shot movies out there, but with the Oscar nominations for best picture, best cinematography, best sound mixing (and seven other categories for a total of ten nominations), others seem to agree that Roma does set a very high bar. And it's on Netflix so you have no reason to not watch! But movie making aside, what I did want to write about was the inequality and social order that the movie highlights. Warning: minor spoilers ahead.

Roma is primarily a loving look-back at the caregiver who raised writer-director-cinematographer-god Alfonso Cuaron, but it is also about his memory of Mexico in the 70s, and a general piece of art about nostalgia, family, etc. What I haven't seen talked about very much in reviews is how it's also about inequality. Cuaron definitely shows a clear contrast between the haves and have nots in Mexican society, and more hard hittingly, the contrast between owners and servants in the protagonist household, starting with the lavish owner's house versus the ho-hum servant quarter. Having grown up in India, no surprises to me that yes the servant class lives a very different life. But what I never realized was how hard coded the inequality was. That if you are from the servant class in India, you basically almost never manage to break into a different life. Maybe I was deluding myself all my life that in India you can get opportunities if you studied hard, learnt some English, and maybe got a break or two in life. 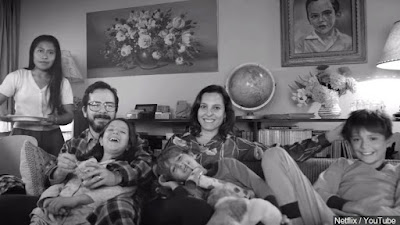 Well Roma ripped off all those delusions for me. That's because in Mexican society you can visually differentiate between the haves and have nots. People with European heritage are wealthy, have a lot of properties, go to all the right schools, get all the right breaks in life etc. And people with primarily indigenous heritage end up in the servant class or with much lower affluence. See Roma photo that shows the difference in ethnic background between the owners and the maid. No prizes for guessing who is who. And this isn't me speculating based on watching one movie. I have been visiting Mexico City frequently for work for the last year or so, and have observed this divergence first hand. Admittedly that isn't super scientific either, but various demographic studies do back up this fact of Mexican society - check out Wikipedia (EDIT: Cuaron himself talked about the state of Indigenous people in his Oscar winner's acceptance speech). All the movie does is to starkly bring Mexico's well-known inequality to life. And this unfortunate social status quo has been maintained literally for centuries. Think about that for a second. Millions of people have been born, lived and died over centuries, without ever managing to change their social station in life. And we were talking about equal opportunities if folks worked hard?

The difference in the owner versus servant class is visually stark in Mexico, but it's no less rooted in India even if less visually apparent (and hence easy to gloss over). Note that I am deliberately not using the upper class - middle class - lower class terminology. Too many of us Indians like to bucket ourselves into the ethically convenient category of 'middle class', thus absolving ourselves of any responsibility for how broken our social system is. All of us nice law-abiding not-too-wealthy middle class Indians who succeeded in life due to hard work and engineering degrees and IT jobs and whatnot, I bet that every single one of our families had servant help, typically in the form of maids who would clean our houses, do our dishes, hand wash our laundry, even clean our toilets. Maybe not full time like in Roma, but the concept and the inequality was the same. So while we celebrate the rise of India's middle class and our own personal middle-class 'honest' successes, do you think any of the children from our 'servants' ever had a chance in life? Maybe the luckiest and hardest working of them got to become a peon or bank clerk, but definitely not an 'officer' job. No sir, those are for children from English-medium-educated, 'nice middle class' families. Class systems are so deeply rooted in India that we don't even notice them most of the times. And English has become a convenient means of sorting the haves from the have nots. I will skip this convenient middle class terminology now and go back to owner class versus servant class.


Neat appropriation of a colonial era class system by the caste system in the last 60 years since independence.

I am not saying that there is zero movement from servant class to owner class. There are stray successes that only highlight the exception, not the norm. Social and economic system based inequalities / injustices are so hard coded that we are thousands of kilometers from meritocracy while most of us may like to think we are just a couple of meters away. This isn't just Mexico (ethnicity based) or India (caste based), historical factors prove nearly impossible to wipe away everywhere in the world (e.g. race based in the US). Something that hopefully we will all keep in mind while celebrating the success of Roma.

Bonus read: Old but gold comic about privilege here
at 6:21 AM No comments: